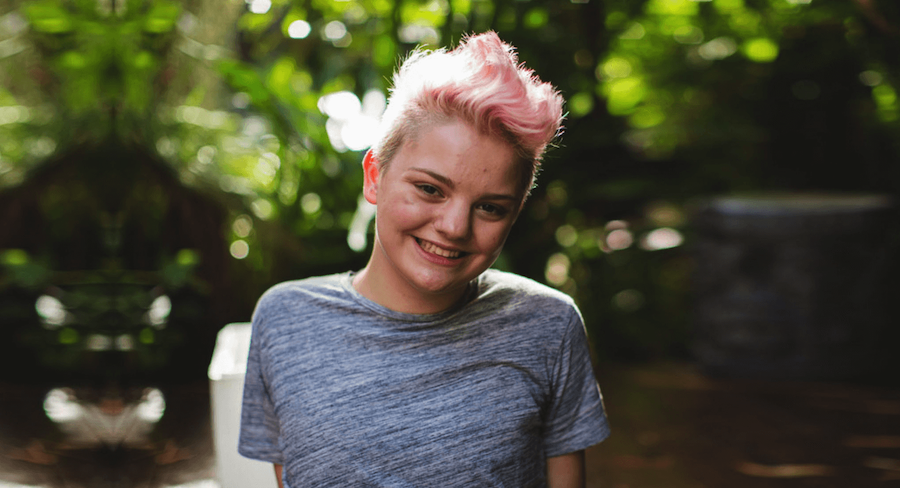 I just came out as non-binary, here's what that means

My name's Arlo, and I’m transgender. That means I don’t identify with the gender I was assigned at birth. I'm not a girl, and the thing is, I’m not a boy either. So the word I use to describe my gender is non-binary.

Here are some things you need to know to understand who I am.

What is the gender binary?

The gender binary is the Western concept that there are only two gender options: male or female. The most important thing to know about the gender binary is that it’s kind of a load of crap. Gender identity is one’s own internal experience and perception of self. And you know what? It's completely separate to one's sex.

What does non-binary mean?

In really simple terms, a non-binary person is someone who does not identify as exclusively a man or a woman. Someone who is non-binary might feel like a mix of genders, or like they have no gender at all.

Personally, I identify outside of the gender binary entirely. I am not a boy or girl at all. Some other non-binary people might identify partially with one or more of the binary genders – for example, a gender-fluid person (someone whose gender changes over time) who identifies as a girl sometimes and genderless other times. There are so many different ways to be non-binary, and we're all still valid and real!

So, how different are you now?

In a lot of ways I’m same person that I’ve always been. If anything, I’m a more authentic version of myself now that I can be open with people in my life. Like everyone, I'm still figuring out exactly who I am, and as I keep finding what works best for me I'll ask my friends and family to change some things about how they treat me.

Here are some of the changes I have made. These might last for the rest of my life, they might not even last for the rest of the year. The important thing is that this is who I am right now, and although I know that linguistic shifts can take time to get used to, it means the absolute world to me when people strive to consciously change some of these habits to respect my identity.

Pronouns are the words that take place of a person’s name. Pronouns don't have a gender, but some people feel more comfortable with certain pronouns than others. I use the pronouns ‘they/them’ since they’re what fit me best. So if someone was talking about me, they'd say, "This is Arlo, they're awesome." or "Oh, Arlo - Yep I’ve met them before."

Find out more about pronouns >>

Nope! They/them can refer to a single person as well. You've probably done it before usually when you don't know someone's gender. You might say something like "Is your friend coming to the party? Do I need to know anything about them?” Using they/them to refer to just one person has been around for a long time - even Shakespeare did it.

A lot of our language is gendered. Mother, brother, boyfriend, actress – the list goes on. I'm a lot more comfortable when people use gender-neutral language when referring to me, ie. person, friend, human, kid, adult, champion. I know that these can seem clunky and odd at first, but it makes me feel a lot more comfortable when you use them. Using gender-neutral language means a lot to me (and a lot of other non-binary people!), and using them will start to feel more natural as you get used to them.

Phrases like 'ladies and gentlemen' are also gendered, and when we use them we exclude people who aren’t ladies and who aren’t gentlemen. Instead, try phrases like 'hey everyone', 'hey pals!' or 'distinguished guests'.

Part of coming out as trans or non-binary for many people is choosing a new name (especially when an old name is a traditionally really gendered one). A lot of people know me by the name my parents called me when I was born, so it’s been a process for me to let them know about my new name: Arlo.

But there's the thing – it's worth the effort. Arlo is my name, and it's important to me that I have a name that reflects who I am. Inviting people to know me as Arlo, to know me for who I really am, is a step I'm so glad I was able to take.

These are just some of the things that might change when a non-binary person publicly affirms their gender. It can be difficult to work out exactly how you want to express yourself, and it can be difficult to adjust as people you know change. But it can also be a wonderful experience to celebrate your gender, the same way friends and family celebrate their own.

I've been lucky enough to know some phenomenal people who have supported me, and been completely excellent in using my pronouns and name. I couldn’t have got this far without them. And that’s what it really comes down to. It means the world to non-binary people when they are supported – it did for me!

Check out more Minus18 articles about gender identity >>